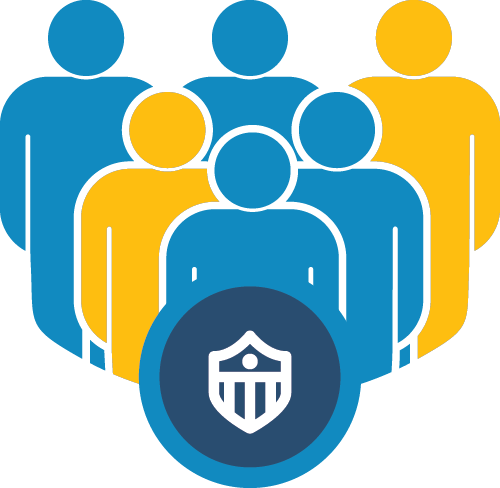 THE WEAKEST LINK
IN CYBER SECURITY

Locked doors, security guards, and alarm systems used to be sufficient to protect an organization’s resources. Thieves had to put themselves at personal risk to steal anything of value.

No longer. The most valuable property a company owns — its data — can be stolen over an Internet connection. The thieves who steal this information are all over the world and nearly impossible to catch. Many receive training, and sometimes encouragement, from well-funded programs created by foreign governments.

Their work can destroy an enterprise’s reputation in an instant.

And hackers keep getting better! They create scams using an increasing array of psychological and technical tactics, making them harder to detect than ever before.

Cyber security is a top concern for most organizations.  Enterprise cybersecurity is now a strategic priority garnering significant company resources for highly trained personnel and an array of technology solutions aimed and a spectrum of threat vectors.  However, many organizations have directed limited resources at one of the most critical areas of risk exposure, people.  Significant risks come from the simple, daily mistakes made by employees and contractors at all levels.

“Threat Vectors” — the vulnerabilities that hackers target — are everywhere. They’re even baked into the systems and technologies companies use to increase productivity and serve clients: email, BYOD (Bring Your Own Device), voicemail, and IoT (Internet of Things).

However, savvy organizations understand this and make a concerted effort to train employees regularly and thoroughly. They establish and communicate clear and evolving policies to meet the ever-changing world of cybercrime.

Though the world’s largest organizations have fallen prey to hackers, employees and contractors who are trained, prepared and actively participating in your internal cyber defense team can catch schemes before they happen — or report them before extensive damage is done.

Human Error in Cyber Security: What the Stats Say

Human Error in Cyber Security: What the Stats Say

As connected tech becomes increasingly ubiquitous, most of us tend to grow lax with security — especially if we haven’t experienced an attack. It’s tempting to believe lies like, “No one falls for that stuff anymore.” Or, when our freedom seems threatened, to say, “There’s no reason to get extreme about security protocol.”

But the data tells a different story. In 2018, hackers stole $500 million in personal records — 126% more than they did in 2017. One source estimates 44 records are stolen through cyber security breaches every second!

The stats about who’s to blame are confusing, but they all point in the same direction. For example, one study found that:

Another study tells a more disconcerting story: human error is the cause of 90% of data breaches.

Whatever stats you reference, the most significant risk to an organization’s data does not come from bad actors. Instead, they come through simple, everyday mistakes — clicking the wrong link, giving information to the wrong person, or neglecting to follow an established policy.

Unfortunately, too many organizations aren’t doing what it takes to build and empower their internal cyber defense team combat the problem.

Organizations are rapidly working to build internal Cybersecurity Teams.  Often, these new business units report directly to the most senior executives.  However, finding qualified, experienced and highly training cybersecurity resources is a challenge as the supply of these individuals is far behind the demand.  Some reports indicate that there will likely be 3.5 million unfilled cybersecurity jobs in 2021.

The Weakest Link In Cyber Security:
The Human Factor

The most valuable property a company owns is its data. Download your PDF now to learn more about this critical aspect of cyber security.
GET THE PDF 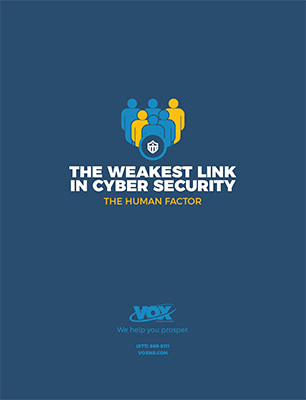 The Weakest Link In Cyber Security:
The Human Factor

The most valuable property a company owns is its data. Download your PDF now to learn more about this critical aspect of cyber security.
GET THE PDF

Employees and subcontractors can leave an open door to hackers in a variety of ways. And since hackers find and exploit simple mistakes, vigilance is key.

Here are some possible avenues of attack, aka “Threat Vectors.”

Phishing is the most common — and most pernicious — Threat Vector. It’s easy to gain access to employees through a simple email or phone call.

Though everyone’s familiar with the “foreign prince” scam by now, hackers have moved on. They use advanced psychology to trick victims, tailoring their attacks to those they’re targeting.

First, Business Email Compromise (BEC) scams are emails designed to trick employees into giving up corporate information or passwords. They include subject lines containing words or phrases like “Urgent,” “Past Due,” or “Your Account May Be Suspended.” A link inside the email will usually lead to a familiar-looking webpage asking for a password.

Whaling Phishing targets high ranking members in a company. These are usually created by smart hackers who have done their homework, know their victim, and have devised an especially focused entrapment scheme.

Vishing, or Voice Phishing, is a technique where fraudsters trick targets into giving out sensitive data over the phone. Though the old schemes are easy to catch — poor quality phone connections and demands for data — new schemers use advanced manipulation tactics. Contact Center employees are especially vulnerable.

Because we can all get a little “too comfortable” in our daily routine, it’s essential for every employee at an organization to self-diagnose bad habits. It’s also crucial for managers to notice and point them out.

Though your IT department may be working hard to make sure your data is protected, your employees and contractors may be, unknowingly, working against them.

For example, staff members with purchasing power often install favorite apps without oversight. But when the IT department hasn’t had the chance to integrate those apps in their security plan, employees leave a door open to hackers.

And it’s not just apps and other downloads. Departments may purchase smart appliances, webcams, or other IoT devices, not realizing they may be a source of exposure.

In most organizations, one-third of a company’s tech purchases are made without the CIO’s approval. The problem extends to all levels of the organization: 79% of C-Suite execs believe they can make IT purchases faster and more efficiently than their IT staff!

However, cyber security policies often don’t keep up with BYOD. Since IT departments rarely (if ever) scan or review personal devices, risks present themselves when employees:

When employees work from home or public places, it’s vital to create and communicate policies and procedures to protect data.

External vendors and subcontractors bring their own bad habits, dysfunctions, and cyber security risks with them. They can do much damage if:

All of these off-campus workers are prone to access the Internet over unsecured Wi-Fi in coffee shops, airports, and at home.

Yes, it happens. And it’s not just small businesses with non-existent IT departments. Employees in the largest organizations make mistakes that put vital information at risk.

Info for the CEO

In one successful whaling scheme, a highly placed SnapChat employee received an email from a fraudster named “Spiegel.” The hacker asked for a copy of the company’s payroll information. Believing the email had come from company CEO Evan Spiegel, the employee replied with the requested information immediately.


An employee working for the City of Calgary sent an email requesting technical assistance from a worker in another municipality. The request, sent both to the recipient’s home and work addresses, contained the names and salary information for more than 3700 fellow city employees.


An employee working for Idaho Power recycled 230 hard drives by posting them on eBay. However, the employee sold and shipped the hard drives before IT could wipe them clean.


The Danger of Print

Finally, who could be more vigilant than a Department of Homeland Security employee? However, one DHS employee brought paper copies of an anti-terror Super Bowl plan on a flight, then forgot them. A CNN reporter returned them safely (but still reported on the incident!).

Cyber Security
Closing the Gap on the Human Element

Cyber Security
Closing the Gap on the Human Element

It’s easy for employees and contractors to make mistakes that can cost an organization millions of dollars, expose sensitive information, and damage reputation for years to come. The variety of scams and the propensity for human error make it all too easy for hackers to take advantage.

But every organization can help keep “the human element” at bay:

Even so, we all tend to forget what we’ve learned. Employees need regular and detailed training. They should be able to spot a current phishing scheme and know how to report it. And employees should feel comfortable reporting mistakes immediately.

This is true throughout the organization — members of the C-Suite can’t miss out on trainings or subvert policies. No one can be “above the rules.”

Unleash your most powerful line of defense, your human resources.

This interactive, 90-minute workshop will instantly show results. Your employees and contractors will now have key insights and understandings that bridge both their home life and business life to create heightened awareness, new behaviors and a proactive approach to protecting the things that matter most. 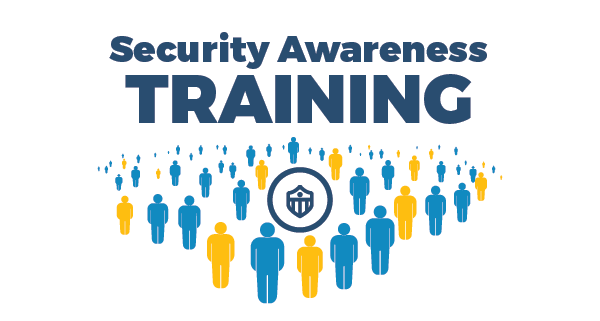 Unleash your most powerful line of defense, your human resources.

This interactive, 90-minute workshop will instantly show results. Your employees and contractors will now have key insights and understandings that bridge both their home life and business life to create heightened awareness, new behaviors and a proactive approach to protecting the things that matter most.

Keeping your organization secure is hard work. Creating clear guidelines — then communicating them in a quickly changing landscape — can be difficult. Sometimes, CIOs and HR departments find themselves in a tough spot, needing to change the culture from the top down.

That’s why Cyber Security Training is part of the VOX Lifecycle. We help you establish a set of best practices, then communicate them clearly on your behalf. We come alongside your team, customize our presentations to your industry and culture, then help your organization stay up-to-date and informed.

It’s all part of our suite of services to keep clients — and those they serve — protected from data breaches.

The simplest, quickest and least expensive way to reduce your organization’s risk profile and reduce the likelihood of a cyber security breach is to educate and inform your people. Your employees and contractors have a vested interest in your organization’s success, they want to protect your business, clients and critical assets. So, enlist their help!

Through VOX Security Awareness Training, you will unleash your most powerful line of defense, your human resources. This interactive, 90-minute workshop will instantly show results. Your employees and contractors will now have key insights and understandings that bridge both their home life and business life to create heightened awareness, new behaviors and a proactive approach to protecting the things that matter most.

Unify and manage your entire company’s network and data access privileges from a centralized dashboard accounting for user roles, device types, location, and time-of-day. Ensure access to all of those that need it while seamlessly turning away unauthorized parties.

Firewalls actively monitor incoming and outgoing network traffic, allowing authorized access to pass through with little difficulty while inspecting and quarantining threats and suspicious activity to keep your system secure.

Monitor and analyze how your entire network’s security functions are performing from a single, unified dashboard to ensure consistent policy enforcement and handle any potential threats.

Routers select the fastest and most efficient paths for data to travel in a network. If compromised, suspicious agents could transition control of a single device, to an entire network. By securing routers, you can quarantine threats and prevent unwanted intrusions.

While firewalls prevent the unauthorized access into a network, IPS actively monitor activity of devices, applications and communications within the network to identify threats and breaches of network security and acting should they arise.

By utilizing security gateways, web filtering, DNS, and application control, you can protect your employees and your network from suspicious websites and other unseen threats.

If you’re ready to get the power and protection of VOX Security on your side,
contact a VOX Transformational Guru today.